THIS WAS the summer that our children became proper friends. Last summer, Little Buddha was uncertain on her feet and struggled to communicate, which meant her brother often did his own thing. This time round, he had a devoted sidekick and they’ve been pretty much inseparable.

Once school was out – and the other extra curricular activities paused for the summer – they became the Knight and the Princess, the Park Ranger and the Friendly Tiger, Luke Skywalker and Princess Thingybob. They could usually be found in some secret warren of the house or rampaging in the back garden, in their exclusive and highly descriptive own world.

Sure, they also squabbled more than usual, told tales on one another and competed for attention. But they also acted as a team, using pincer tactics to secure treats or unscheduled film showings. Please Daddy! Pweaaaaaaaase Daddy!

On days out and our recent holiday in Northumberland, they eked out every last ounce of pleasure and excitement from playgrounds, castles, nature walks, beaches and camp sites. Sometimes, whether at home or out and about, the Duchess and I could even relax with a coffee and a paper, as the two amigos looked after one another.

Such daily harmony might not survive the winter, especially once Boy Wonder goes to school full time. But I’ve got a feeling that the magical powers of the sun will mean we get to enjoy this summer loving for quite a few years yet. 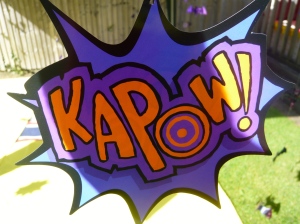 FOR BOY Wonder’s recent 4th birthday, I wanted to do something special to reflect the energetic, thoughtful and creative boy that he has become. He’s currently obsessed with superheroes and one Caped Crusader in particular: Batman (or ‘Mat-man!’ as Little Buddha likes to shout every time a cape comes into view).

Play centres are appealing locations for birthday parties because the staff provide your celebratory entourage with entertainment, libation and insurance should anything go wrong. However, researching a few places near to us I found too many limitations: minimum numbers, rules and regulations as long as your arm and extra costs if you dare introduce a theme. So, it was back to the drawing board.

END_OF_DOCUMENT_TOKEN_TO_BE_REPLACED

WE’VE JUST returned from a family holiday in Northumberland. A combination of tight finances and the memories of dealing with Boy Wonder’s bronchitis in France a few years ago mean we holiday in Britain and we’ll probably do so for a few years yet. Last year, we stayed on a great farm in Cornwall, having visited Pembrokeshire the year before. This time, we contained the mileage by staying in the north and Northumberland didn’t disappoint. We loved it so much, we’re already planning a long weekend there later in the year – and the Duchess even mentioned moving there for good!

END_OF_DOCUMENT_TOKEN_TO_BE_REPLACED

Six years ago today, the Duchess and I got married. Here’s my groom speech from the Big Day:

Good evening and welcome to North Yorkshire. Now most of you probably know that I work in PR so I’d like to categorically confirm that the following statements are completely true and devoid of any exaggeration or embellishment.

Welcome to the Crab and Lobster – not, as rumour has it, named in honour of marriage. You know, a sideways move for one; the other, meanwhile, just can’t stop giving it that [imitate pincer movements]. I’d like to think that it does represent the marriage to come: comfortable, relaxed, a little bit quirky and comes with range of strange but curious implements.

I’d like to thank Chris for his kind words – and, of course, for allowing me to take his marvellous daughter off his hands. The first time I met Chris and Val was certainly memorable. It was a sunny Sunday afternoon and we went round their house for a barbeque. After Chris had taken a sharp elbow in the ribs from Val for greeting me with a ‘Wotcha Dave’ – Dave being Karen’s ex-boyfriend, tall, dark, glasses so easy mistake to make but no hard feelings… hey, Trigger – we made our way into the back garden to share a few beers while the meat cooked.

END_OF_DOCUMENT_TOKEN_TO_BE_REPLACED

OUR CHILDREN SLEEP THROUGH THE NIGHT. They always have done. The Duchess and I are understandably relieved and very grateful. But we don’t like to talk about it too much. On account of the hatred we see in the eyes of other parents.

Like when our son, Boy Wonder, was about nine months old and we bumped into a couple from our ante-natal class. We were like four excitable puppies in a bog roll factory talking about the wonders of parenting. Until they had the misfortune to enquire: ‘And how’s he sleeping?’

END_OF_DOCUMENT_TOKEN_TO_BE_REPLACED 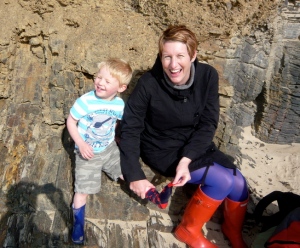 ‘Look at daddy in his mankini’

We’ve just returned from a week in Cornwall. It was our first family holiday since Little Buddha appeared. When Boy Wonder was her age, we flew to Normandy to stay with family but unfortunately he got a severe case of bronchitis and although my aunty dealt with the doctor and organised the (impressively large) range of medicines we decided to stay on home soil for the next few years.

So, last year we went to Pembrokeshire in Wales and this summer we drove through the night to sample the marvellous beaches of the south west.

END_OF_DOCUMENT_TOKEN_TO_BE_REPLACED

My Tweets
shaunjharley
Create a free website or blog at WordPress.com.